I had to fix the bug which broke functionality of certain plugins such as Types.

Fix the issue related to the action in form

Types is a very popular plugin, whose number of active installs is over 200,000. It makes your job easier to handle the content types, custom fields and taxonomies.

But IP Location Block had inappropriately handled the action attribute in form of Types. So it seemed blocked when creating a custom field or something. (Thanks to opsec !!)

This issue will also happen with other plugins whenever the action in those forms are empty.

As for the specification, the current HTML5 draft says that:

The action and formaction content attributes, if specified, must have a value that is a valid non-empty URL potentially surrounded by spaces.

But empty action is not a rare case in old-school. So it should be filled with the URL to the document plus nonce to block a malicious access to the admin area.

In this release, empty action in HTML elements have been correctly handled.

The section order from a UI point of view

In the early stages of development, this plugin has a singular function that blocks only spams from outside my country, and my main interest is which API should be used to get the country code. It means “Geolocation API settings” was my first priority from a developer’s point of view. But this is not same with a user’s interest. So the order of sections on “Settings” tab has been rearranged in this release.

Additionally in the previous version, each tab loads js and css files for FooTable. But obviously it was bad for the site performance point of view. So I’ve optimized loading resources.

Most of users do not prefer themselves to be blocked. From this release, such a unexpected blocking will be prevented by default. This feature is proposed at support forum. (Thanks to internationils !!) 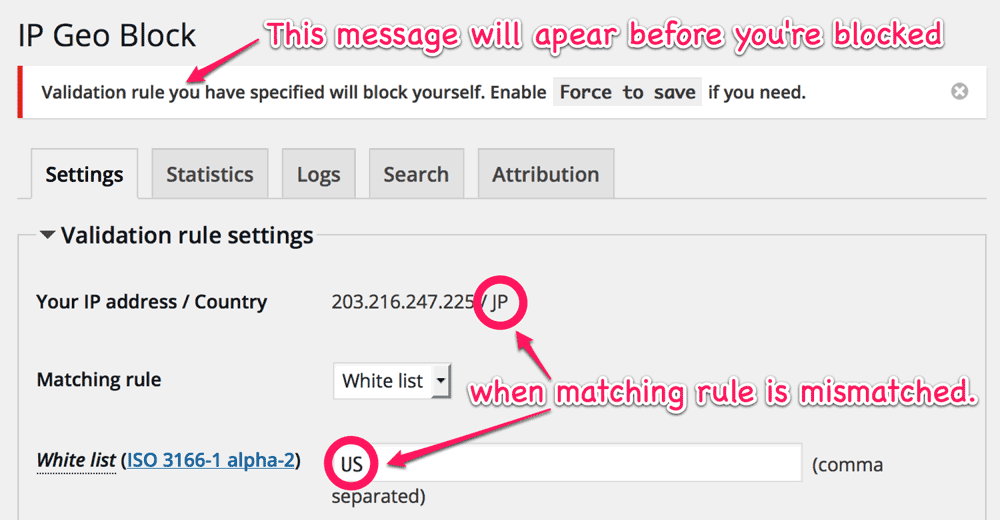 I think it’s also useful to test the functionality of this plugin if it works correctly or not.

If you’d like to kill yourself, you can enable “Force to save” switch at “Plugin settings” just above the submit button.

Notice that this feature is not so user friendly because the setting data you want to update will be gone. So please be careful. It’s not a feature to use actively!!