The Validation timing shoule be set as "init" action hook. If you set it as "mu-plugins" (ip-location-block-mu.php), P3 would fail to measure the performance of this plugin because Must-use plugins would be into the race condition.

This awesome tool has two mode to measure the performance. One is “Auto scan” which will access to both admin area and public facing pages under the confition of logged in as an admin. On the other hand, “Manual scan” mode can make it possible to freely access. So in this report, “Manual scan” had performed only by accessing front-end pages.

The following results were measured with a private window.

Definitely we need not only hardening security but also speeding up the site. So you may want to use IP Location Block with a caching plugin.

This is a big challenge to make this plugin compatible with cache plugins, because they would respond the requested content without executing any PHP codes at the very beginning of WordPress core process or even before the core starts.

To achieve the demand for both security and speed, the cache plugins need to support the following requirements.

Do not cache page

One of the most important thing for this plugin is to prevent caching an error page where an access denied message is rendered. For this purpose, this plugin defines DONOTCACHEPAGE constant and set the flag for is_404().

On a cache plugin side, one of the followings needs to be supported.

For example, WP Super Cache supports both of them by default, while many other plugins have 2. in their setting options.

IP Location Block provides the option “Validation timing” which kick off this plugin at an earlier phase than other typical plugins.

In correspondence with it, a cache plugin need to support the option for “deferred execution” or “late initialization” to give this plugin a chance to render an error page before the cached page is responded against the requests from blacklisted countries (or IPs).

The followings are the options setting in each plugin.

Some users reported that WP Rocket's feature "Critical CSS" triggers error while using IP Location Block. This is because WP Rocket is trying to reach the site but their server IPs are not on the whitelist. 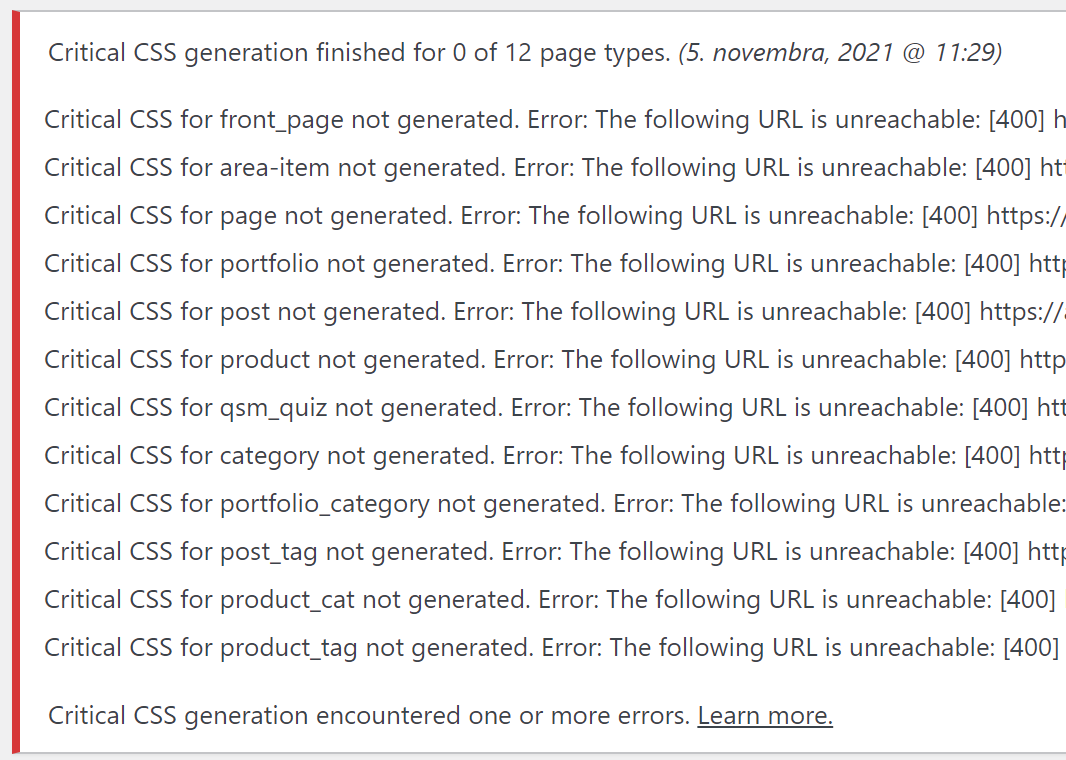 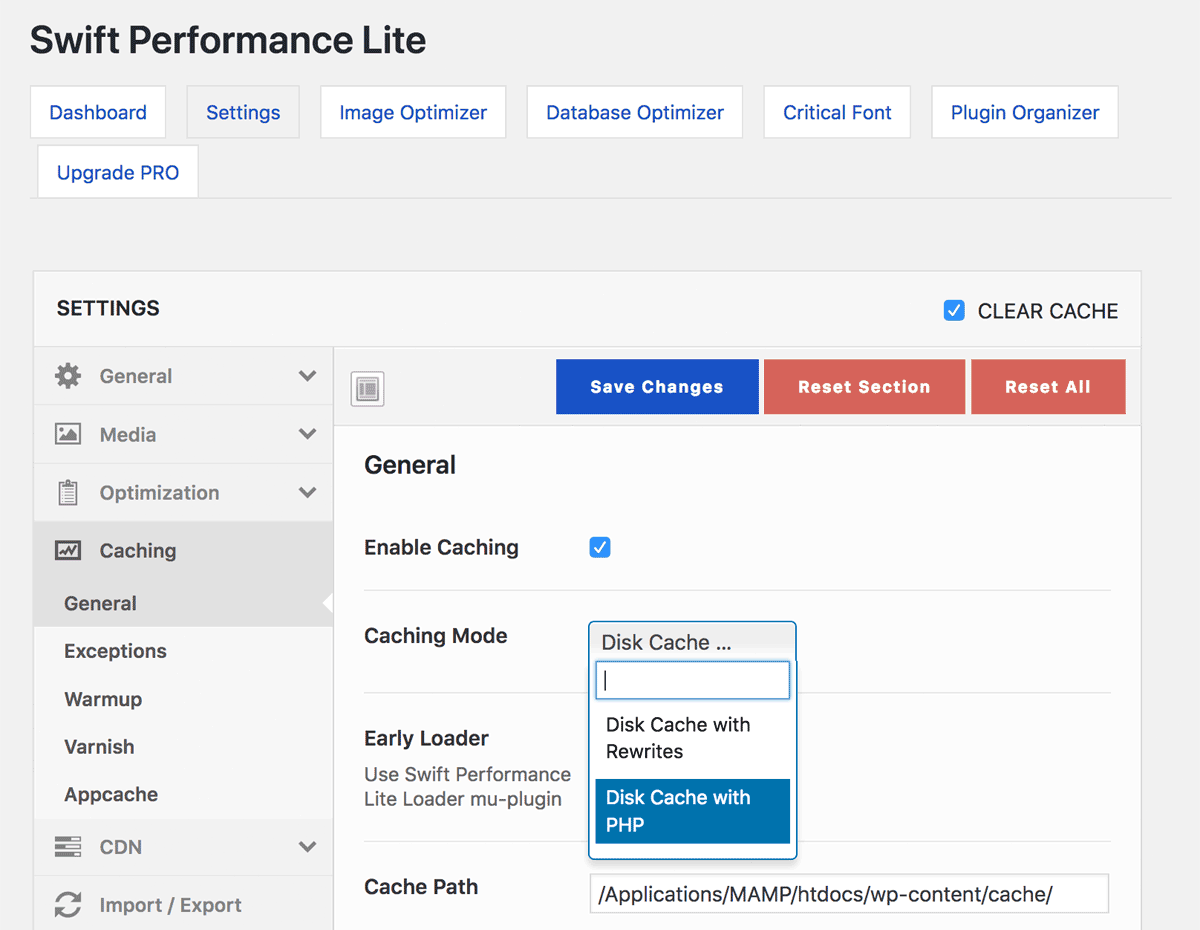 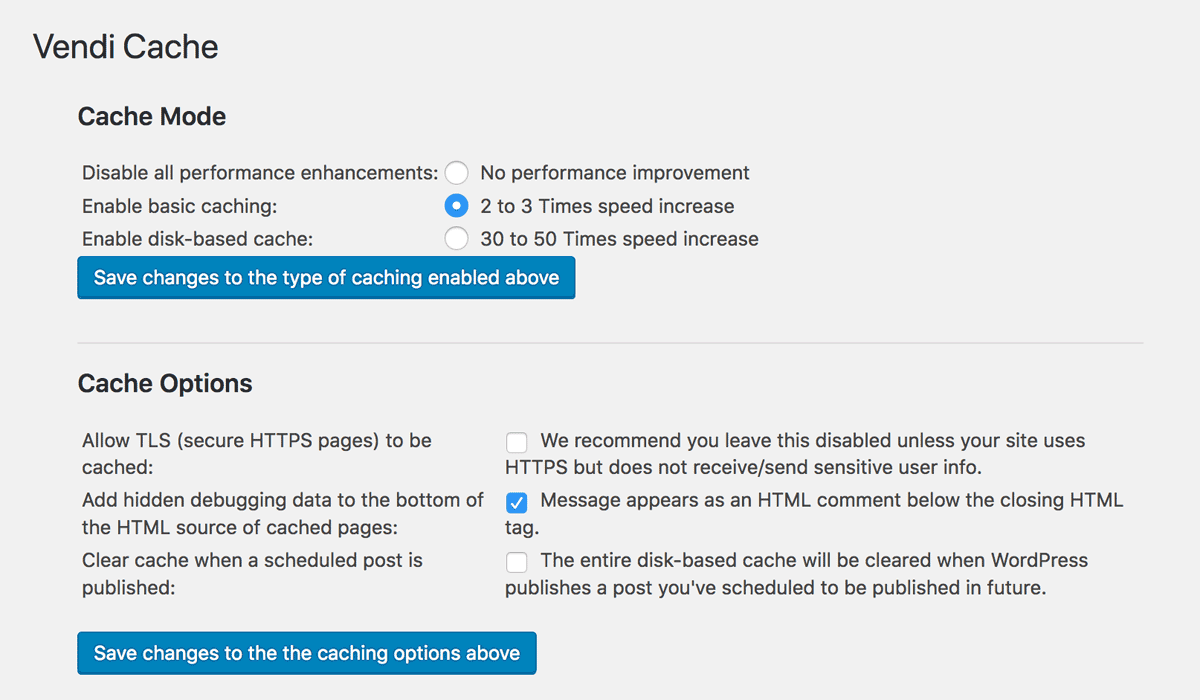 A must-use plugin is a plugin that will always be activated by default and be loaded prior to other typical plugins when you install it into your wp-content/mu-plugins/ directory.

You must select "mu-plugins" (ip-location-block-mu.php) as Validation Timing in “Validation rule settings” section to install this plugin as “must-use plugin”. 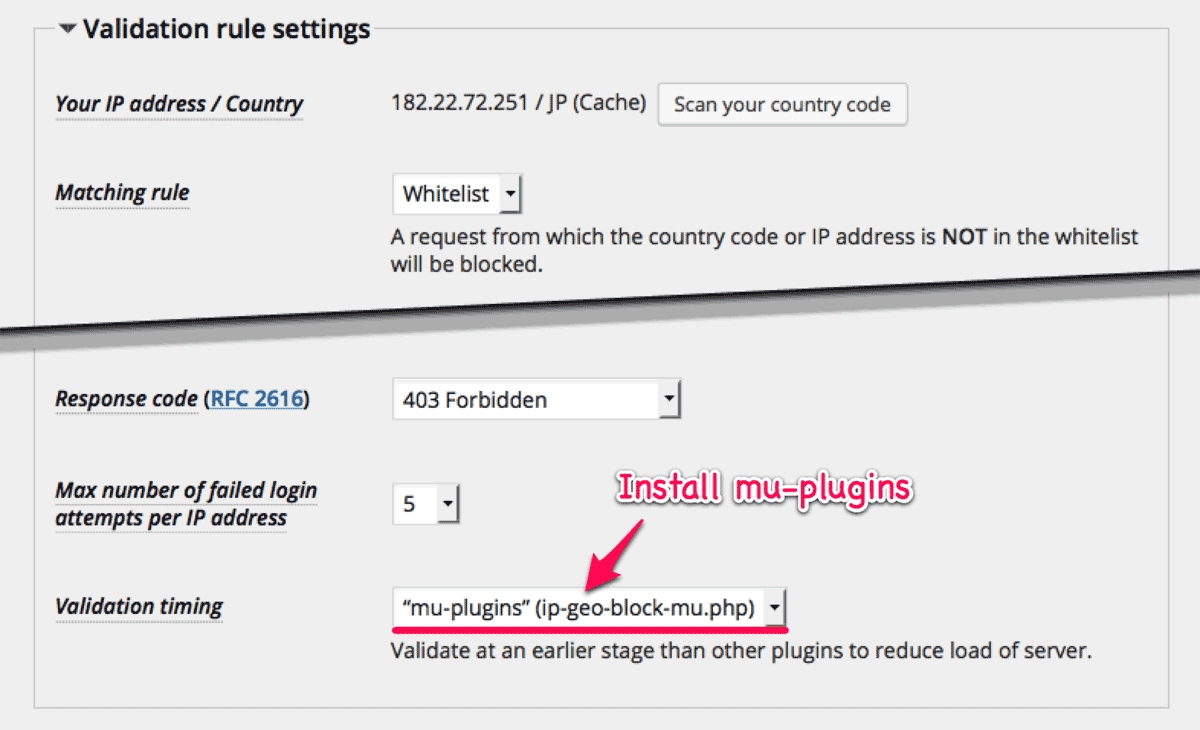 Installing ip-location-block-mu.php has following restrictions mainly because of its execution timing which is before after_setup_theme action hook:

What will become of my site if I use other plugin?

Well, it would not be so serious. Let’s think about WP Fastest Cache for example.

If someone requests a page where a cache hit occurs, no PHP code would be executed but static contents in the cache would be responded. In this case, this plugin has no chance to block anything.

If someone requests a page where a cache miss occurs, then WordPress would start to handle the request. In this case, this plugin would have a chance to validate the request.

So a visitor from forbidden countries sometimes gets cached contents and sometimes gets blocked. This means attack from forbedden countires would fail. As a consequence, blocking by country can still reduce the risk of infection.

How about Object Cache plugins?

WP_Object_Cache is a core class that implements an object cache. It stores all of the cache data to memory and makes them reusable within a request, but it does not make them reusable between different user agents even for the same content.

Unlike the full page cache plugins mentioned above, object cache plugins like LiteSpeed Cache on OpenLiteSpeed Web Server and Redis Object Cache using Redis make the “object” persistent. So the mechanism of persistent object cache is suitable for dynamic contents, and should be compatible with IP Location Block.

When this plugin blocks a request, it behaves differently depending on the setting of the “Response code”. This document explains about the details and also how to customize the error page for human.

END_OF_DOCUMENT_TOKEN_TO_BE_REPLACED

Back to the article: Referrer Suppressor for external link

For SEO, you must be sure to grant permission against search engine bots or crawlers such as google, yahoo and being while shut out the bad bots. This feature is possible to fulfill your wishes by giving a pair of “UA string” and “Qualification” separated by an applicable rule which can be “:” (pass) or “#” (block).

You can specify a part of user agent string (case sensitive). An asterisk “*” matches all user agents.

Currently, you can obtain 7 types of qualification listed bellow:

The host name HOST corresponding IP address will be retrieved via DNS reverse lookup which is disabled by default.

DNS reverse lookup will attempt to fetch a dns PTR record for an IP address. Its cost against the server’s resources is relatively high. For example, the following picture shows the result of 1st and 2nd time which is available at “Installation information” in “Plugin settings” section. It means that the fetched result would be cached in your server.

If “DNS reverse lookup” is disabled, then HOST and HOST=... will always return true. For example, Google:HOST would be converted to Google:*. In this case, only user agent string would be checked. If the converted result is one of *:*, *:!*, *#* and *#!*, it would be eliminated.

Note: The rules in "UA string and Qualification" will be processed in order. For example, when bot:HOST appears before xyz-bot#HOST, then all the bots will be passed whose user agent string includes "bot" and its host name is available.

This document introduces some useful tools to make practical and effective use of AS number in IP Location Block.

If you want to know about AS number itself, please refer to 0.3.0.4 Release Note.

END_OF_DOCUMENT_TOKEN_TO_BE_REPLACED

Normally, a plugin will be loaded at a certain phase during WordPress boot process and will typically do its jobs after init action hook. It means that a plugin will be kept waiting until almost all plugins have finished to be loaded.

But it’s wasteful to give spams and attackers those resources of your server.

The “Validation timing” at “Validation rule settings” can help to drastically reduce load on server especially against brute-force attacks.

END_OF_DOCUMENT_TOKEN_TO_BE_REPLACED

At the “Validation target settings”, you can enable the option, “Block by country” for each target as a basic configuration. Additionally, “Prevent Zero-day Exploit” can be enabled as an extended option. This document helps you to configure those options to fit for your site.